Interview | Chris Dyson: ‘Listen to what the site and place have to say’

From James Stirling to Spitalfields, Chris Dyson opens up to Ben Flatman about the importance of place and how he grew his practice organically 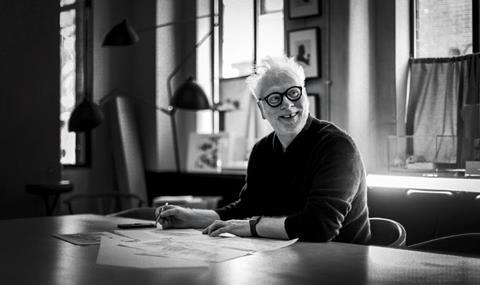 Chris Dyson in his office in Spitalfields

We meet in his office in Spitalfields, on the corner of Fashion Street, which he leases from a long-time collaborator and client. The building is a showcase for the practice, Chris Dyson Architects, but also a fascinating window into Dyson’s own personality and refreshingly playful approach to architecture.

It’s a converted pub, much knocked about and abused over the years, but now lovingly restored to something reminiscent of but quirkily updated from its Victorian heyday. This lively, actively curated hybrid space manages to be an office, coffee shop and community meeting space all rolled into one.

Characteristically of Dyson’s work, there are no strict rules at play. What comes through is a love of old buildings, and a joyful disregard for dull conventions around colour, materials and programme. 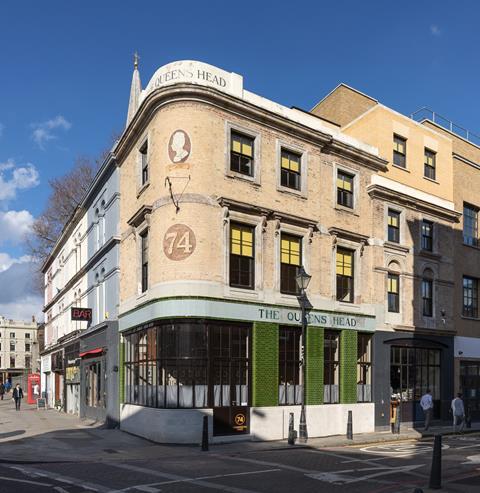 Dyson was born in the West Ridings of Yorkshire but, due to his father’s job with Lloyds Bank, soon found himself moving from Solihull to Guildford and later to London. The peripatetic lifestyle didn’t suit him, and he asked his parents if he could go to boarding school instead. He proceeded to spend several happy years at St John’s School, Leatherhead, where he found the close friendships and stability he had craved.

The importance of belonging to a place and being embedded in its community is something that is key to Dyson’s way of working. His life and work are intimately intertwined: he has lived in Spitalfields since 1990 and knows many of his neighbours personally, as friends or clients, and often both.

Oxford helped instil in him a love of historic buildings – formative experiences still very much in evidence, with conservation architecture and creative reuse being a mainstay of his practice’s work. The other key carry-over from this time is a sense in Dyson’s work that architecture is not constrained by preconceived ideas or dogmas. The wave of postmodernism had already passed, leaving behind a more pluralistic school, open to varied influences. Dyson may not see himself as a postmodernist, but his work fully embraces the freedom that postmodernism provided to explore diverse ideas.

After a year out at Levitt Bernstein, the Mackintosh in Glasgow then beckoned for diploma. There Dyson was taught by Isi Metzstein and enjoyed the challenge of a far more theoretically orthodox environment. Corbusier and Kahn were the touchstones, not that Dyson found this in any way oppressive.

I ask whether recent discussion around an abusive culture at the Bartlett chimes with his own experiences. “There were ‘forceful characters’ at Glasgow and sometimes crits could be intimidating, but never abusive,” he tells me. “I found those lessons helpful. If someone doesn’t like it, the response isn’t to yell or cry about it. Respond rationally.”

He gives an example from a current project in Spitalfields. Tenter Ground is the former home and studio of Tracey Emin, and Dyson is converting it to multioccupancy residential use. The design team had come up with an idea for an undulating roofscape, but the community and planners weren’t supportive. Dyson says his team were unhappy to have had their idea knocked back, but he told them to go back and try a different approach. “All we had to do was come up with a different solution: we did it, and we got planning. That is working with the environment you are in. It is a continuous process of negotiation.” 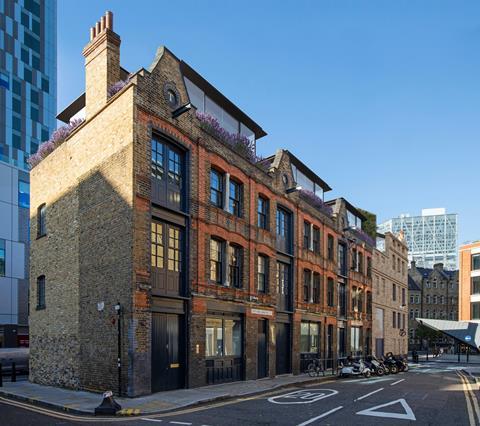 Tenter Ground, the former home of Tracey Emin, will be remodelled as a multi-unit residential development with new additions to the northern end of the site and the rooftop

Stirling’s death hit the practice hard. “We were all in shock,” he says, but Dyson stayed on, continuing to work closely with Michael Wilford on a wide range of projects and eventually becoming an associate.

It was around this time that the practice’s work really took off. “All of a sudden the clients seemed to want to build what we had on the drawing boards,” he tells me. He was there for the transition from hand-drawing to CAD, and worked on the Berlin Embassy and the Temasek Polytechnic in Singapore, a project that he says “got us right through the early 1990s recession”.

When I ask Dyson what he learned during this time, he replies by telling me: “What I didn’t learn in that environment was about the business of architecture. But I did learn an awful lot about architectural design theory and history, place, and the importance of hierarchy and order – it was wonderful. Learning about how the work of an architect requires tolerance was really important. A lot of those ideals I’ve carried through into my current practice.”

On the pairing of Stirling and Wilford, he says: “Michael was a good business partner – they were a good pair.” But Dyson notes that the split responsibilities could be a source of tension. “I think from time to time Michael got a bit cheesed off about it – him being the business partner and Jim being the lead on design, but that was between them.”

It was while working on a project at the Tate Liverpool to remodel the upper floor of the sculpture gallery that he first got a taste for thinking creatively about reusing existing buildings. Dyson describes this as “something really interesting that connects with what I do now, in terms of how you can creatively and sensitively adapt a heritage building for new uses”. This has become a key focus for the practice, with recent assignments including the role of lead heritage and conservation architects on the Bishopsgate Goodsyard scheme.

Eventually Wilford closed the London practice but continued to operate a Stuttgart office, in partnership with Manuel Schupp. Dyson stayed on and found himself commuting to Germany. He was spending the week in Stuttgart and coming back to see his family for the weekend on Friday night, but soon realised this wasn’t sustainable.

Giles Martin (now a director at Wilkinson Eyre) helped set up a job with Terry Farrell, and a directorship followed from 2000 to 2003. While at Farrells, Dyson worked on several large hotel and office projects in China, as well as the Greenwich Peninsula masterplan. “I enjoyed working in the London environment again and learning from Terry’s encyclopaedic knowledge of London. He knew so much,” says Dyson. 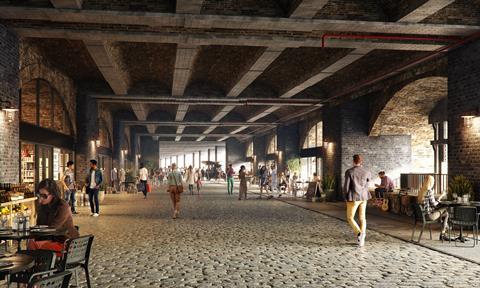 Restored London Road under Bishopsgate Goodsyard, with retail and cafes

Then the opportunity arose to work with Wilford again on a proposed Museum of Africa in Stellenbosch, South Africa. It was a nine-month-long piece of work and, although the project never came to fruition, Dyson says: “It gave me the confidence that I could do it. After the project stopped, I was completely convinced I was going to be able to run a practice on my own.”

Spitalfields has come to be central in Dyson’s life and work. He moved in at a time when many of the houses were still in a very poor state of repair and he has been one of the key figures in restoring many of them. But what is clear in speaking to him is that he’s not just invested in the bricks and mortar.

It’s the life and soul of the place which has seeped into him. He is just as animated by the work of the local community groups (who regularly co-opt the ground floor of his office for meetings) as by the buildings. “Having bought a house in the area because I loved the heritage and the architecture, the practice grew organically, largely as a consequence of a lot of recommendations.”

“Having walked the plank, I swam in the sea that happened to be Spitalfields,” he tells me. “I am fortunate to live in an area of regeneration and my immediate neighbours came to me with projects.”

Initially the work was piecemeal and unorthodox. “I was working on my own house, and I knew the contractors who could do the work. So I was sourcing suppliers and subcontractors for other people,” he tells me. In some cases Dyson was almost acting as the main contractor. “It was quite exhausting. I could only do it because it was on my street and neighbourhood, but it did get me established.”

The transition to a firmly grounded architectural practice was not immediate. It took time for Dyson to find his business feet. “I’d never come across the business of running an architecture studio until I was 40. It had always been done by someone else. I’d never been involved in running a practice,” he says.

Quoting fees was an early and intimidating hurdle. “I used to fret for days about whether the fee I’d put down was appropriate,” Dyson says. “Still today it’s always a bit of a challenge. However, I’ve got more confident at it. And after a while you know what a project will cost in terms of salaries and overheads and what the fee needs to be to make a little bit of profit.”

On the subject of company structure and ownership, Dyson tells me: “I have tried the equity route, and it has not quite worked out the way I had imagined it. I am now back in as sole owner of the company, but I am open to other routes and have a good senior team.”

Like many practice principals with an eye to the future, he is keen to address the issue of staff advancement and reward. “We’ve had a testing two years, but we’re now busier than ever. I want to reach out and reward those people who have been loyal. I’d like to create that structure that allows people to see there is a future,” he says. Dyson talks of growing the practice: “We’ve got 20 or so people, and it feels like a luxury to be able to do that.” 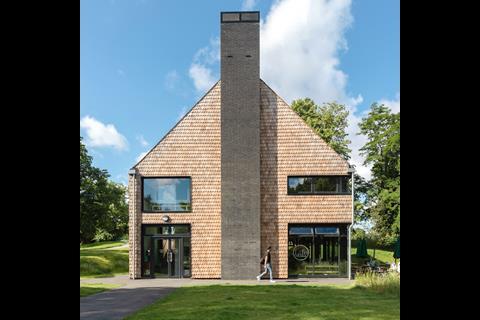 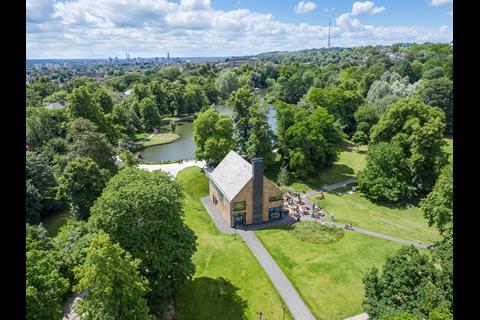 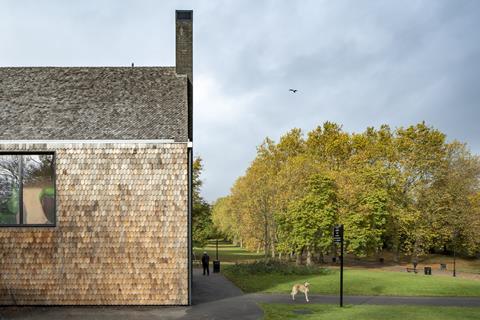 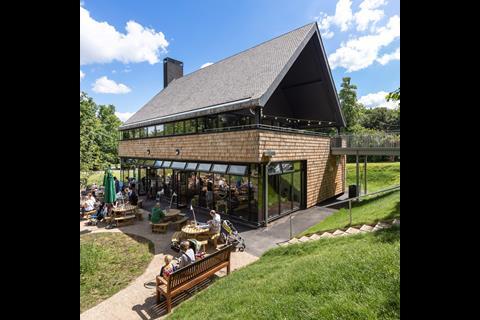 But Dyson also sees reward as coming with responsibilities. “At the same time, I want those senior people to realise that they have to win the work.” Dyson spends a lot of his time winning work but would like to see his team doing more of this too: “Go to that party, schmooze, or whatever you need to do. I want them to get out there and bat for the team.”

On the subject of practice ethos, he says: “It’s about creating a culture and a business culture that underpins the creativity of the office.

“I’ve learned to say no. I think it’s a really important thing to say no politely. And even suggest another practice that you think might be better suited. If you do it well, it reflects well on you too.” 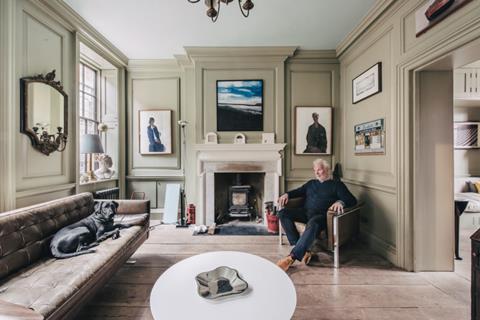 Chris Dyson at his home in Spitalfields